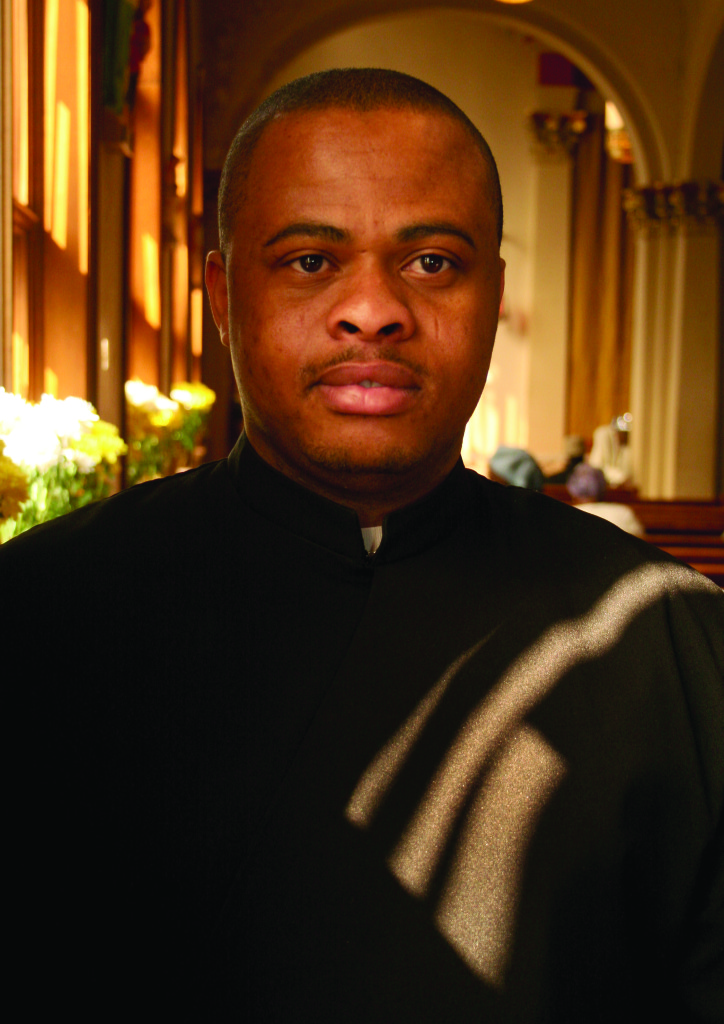 By David Andrews
Father Cornelius Kelechi Ejiogu, SSJ, grew up in Nigeria as the middle of seven children. Today, he’s serving God in the heart of the United States capital. It’s been a long journey for the young Josephite pastor.

With three brothers and three sisters, Father Cornelius was accustomed to being in close contact with people all the time. “I enjoyed having a lot of family. It’s part of the culture there, it’s part of who we are,” said Father Cornelius.

Growing up in a parish under the direction of the St. Patrick Fathers and influenced by the Legion of Mary, two international missionary organizations, Father Cornelius came to know the love and service of outreach programs.

“We’d go to visit Legion of Mary members who couldn’t go to church, or who were sick in the hospital. It was an opportunity for evangelization,” said Father Cornelius.
This selfless upbringing made the transition to the Josephites simple and seamless.

Father Cornelius first heard of the Josephites when Josephite Father William Norvel came to Lagos, Nigeria for a recruiting trip. Inside the church, 3,000 attendees looked on as Father Norvel spoke of the need for African-American priests in the United States.

“He captured my imagination the way he talked about the struggles of slavery in the United States,” said Father Cornelius. “He was so particular in saying that our ‘brothers and sisters’ were taken from this land to the United States, and that now there’s a need to serve them as priests today.”

Father Cornelius was so moved by Father Norvel’s presentation that within a few months, he applied, was accepted and joined the Josephites. He entered the House of Formation in Nigeria in 2003.

Because he grew up in such a tight-knit family, it wasn’t easy to leave his home and move to another continent. “My mom was a little sad at first, but my father was fine. He told me he’d support me whatever I chose to do.  My mom definitely took a while to come around, but she’s been able to visit a few times,” said Father Cornelius.

After his year in the House of Formation, Father Cornelius studied at the St. Paul Major Seminary in Abuja, Nigeria, where he received his bachelor’s in science and philosophy in four years. From there, Father Cornelius moved to Washington, D.C., in 2008 before receiving a Master’s of Divinity and Master’s of Art and Theology in 2013 from St. Joseph’s Seminary. That same year, Father Cornelius was ordained.

Since his ordination in 2013, Father Cornelius has been the pastor of St. Luke parish in Washington, D.C.

“I’m basically starting my ministry, so there’s not too many accomplishments thus far,” Father Cornelius said. “I didn’t even know what I was going to face when I came to
St. Luke, so keeping St. Luke going with its effective structure is sort of an accomplishment.”

St. Luke, a modern brick church in Southeast Washington, D.C., is lined with warm stained glass panels, but the warmth of the parishioners is far more radiant.

“St. Luke’s is a passionate, committed and loving parish that really cherishes its outreach to the poor,” said Father Cornelius. “The parishioners go out of their way to serve those who are less privileged than themselves.”

The service to the community includes working with a food bank every month, operating a vacation bible camp each summer and collecting donations of clothes.

Father Cornelius said the U.S. Department of Justice even uses St. Luke’s hall next to the church for a program for those who have been incarcerated and are re-entering into society.

This program, which started because of St. Luke’s involvement with Alcoholics Anonymous and Narcotics Anonymous goes hand in hand with the goals of the Josephites; to better serve the African-American community, said Father Cornelius.

“The Josephites are hospitable, kind and loving even to those who are considered troubled and the outcasts,” Father Cornelius said. “I hope that we continue to open the doors of our parish enough for them to feel welcome and come back to worship feeling uplifted.”

As if being a pastor of a parish isn’t already a full time job, Father Cornelius is also the academic dean of St. Joseph’s Seminary.

“With meetings and taking care of the parish, it’s a little hectic. There’s a lot of commitment in making sure you’re there for the seminarian students and keeping up to speed with, not only your own parish, but also with the demands of the Archdiocese of Washington,” Father Cornelius said.

The pastor continually promotes vocations, because he knows what it has done for him and what it can do for others. “Having seen the challenges of African Americans first -hand for the last seven years, I’ve come to appreciate more and more those men who came before us and did this work. In turn, I hope others will see the importance of service and join the Josephites’ mission.”